Check-out some of the great shots we got of friends and family in the canyon.  Then head past to read a description of the trip and some thoughts on why trips like these are important.

A view out from Trail View Overlook.

Starting down New Hance
Front to back: Nick, Dennis, Xheni, and Nathan

A view of the trail hugging the rock formation on the right with the red rock to step around.

Good view of the canyon a few hours into our hike.

A break on the way down with the
rain spitting on us.
Left to Right - Nick, Xheni, Dad, Nathan

Xheni and my Dad getting close to Red Canyon

Some ominous clouds just north of us in the canyon.

A shot of the cactus flowerers with a cloudy canyon backdrop.

Dad traversing a tricky section of the trail while I watch.

Looking down the canyon at our tents (Dad's is the grey one on the left, Xheni and I's is the yellow one).

Looking back up trail at Nathan and Lindsey's tent.

The last mile of the hike to the river was in a dry creek bed.

Big boulders lining the creek bed on our way down to the river.

Brining up the rear, my wife and I make it to the river banks.

A shot of the Colorado river.

Xheni and I getting back into camp, ready for dinner.

Lindsey getting started on over an hour of water filtering while Nathan cooks, Dad enjoys the best Raman he's ever had, and Xheni stares off into space.

A fabulous morning as we exited Red Canyon.

First real break on the climb.
Back to Front - Nathan, Nick, Dad, and Xheni

Beautiful shot of the clouds, sky, and the canyon.

A view up the canyon and of a false summit.

Nathan stopped to get a shot of the flowers
against the Juniper tree as we hiked past.

Nathan and I relaxing on a rock shelf that was almost the perfect bench.

The view off to the left from our rock shelf.

Nathan graciously stopped to get a picture of the
wild flower for Xheni.

Nathan was being a mountain goat as he tried to capture the steepness of the trial.
Left to Right: Dad, Xheni, Nick

One of our last looks at the trail.

Relaxing after the hike by Duck on a Rock.

As a passionate Microsoft employee, it should be no surprise that I am a big fan of technology and how it can help people do more.  But what may come as a surprise is that I am increasingly becoming more convinced that taking the time to unplug from tech and to connect with real people – one human to another human – is critical for managing stress, improving performance, and enriching lives.   Back in 2012, Doctoral student Sara Thomée and her research colleagues at the University of Gothenburg’s Sahlgrenska Academy published their thesis on the effect of computer and mobile phone use on stress, sleep disturbances, and symptoms of depression.  They showed some interesting findings that help support my growing beliefs:

Frequently using a computer without breaks increases the risk of stress, sleeping problems and depressive symptoms in women, whereas men who use computers intensively are more likely to develop sleeping problems.

“Regularly using a computer late at night is associated not only with sleep disorders but also with stress and depressive symptoms in both men and women,” says Thomée.

4,100 people aged 20-24 were included in the studies that included questionnaires and interviews to generate these findings and more.  I will share more of thoughts on my growing unplugged philosophy in an upcoming post, but in the mean time, I thought I would share my latest trip off the electronic grid.  It was a great foray into unplugging and connecting with close family and friends as we headed off on an adventure into the back country of the Grand Canyon, where cellphones and laptop are virtually worthless.

After our calming drive through the Desert of Arizona, we arrived at the Grand Canyon a little after 5:00pm.  Our good friends took us out for a quick walk down some stairs to Trail View Overlook where we were just in time to catch some amazing light.  The walk back up the stairs helped to remind us that we were far from the sea level elevation we are accustomed to.  The South Rim’s elevation is 7,000ft after all, which is higher than Denver the mile high city.  After quickly checking my dad in to his lodge, we headed back for some pork roast, good conversation, and the start of what seemed like an endless marathon of Bruce Springsteen. 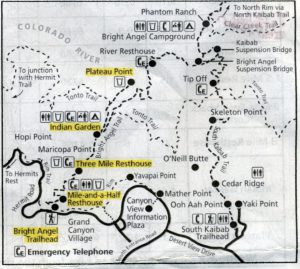 The next day we had our warm-up hike on Bright Angel Trail.  With the trail head being right off the village loop, it is the canonical trail that people think of hiking at the canyon.  It’s well maintained, has covered rest houses, and has potable water.  The only downsides are that you do have to share the trail with the mules carrying people down to Phantom Ranch and there is a real crowd due to the popularity of the trail.  However, we were lucky enough to time our hike where we didn’t encounter any mules and the people hiking were all good natured.  We only went down a short way to the Two Mile Corner and hiked a few yards up off the trail to see the petroglyphs.  It was cool to see something so old and yet so accessible that you could actually walk up and touch it.  Although, if you actually touched it would land you a $250,000 fine.  We enjoyed the hike up while unbeknownst to us, Nathan our virtual trip leader was completing his evaluation of our physical fitness and altitude acclimation.

So why exactly would Nathan be observing our skill level and physical readiness?  Well the National Park Service’s trail description sheds some light as it claims that the new Hance Trail’s reputation is similar to the original, which prompted the 1904 travel writer Burton Homes to speak of it as follows:

[quote style=”boxed”]There may be men who can ride unconcernedly down Hance’s Trail, but I confess I am not one of them. My object in descending made it essential that I should live to tell the tale, and therefore, I mustered up sufficient moral courage to dismount and scramble down the steepest and most awful sections of the path on foot …. ‘On foot,’ however, does not express it, but on heels and toes, on hands and knees, and sometimes in the posture assumed by children when they come bumping down the stairs …. The path down which we have turned appears impossible …. The pitch for the first mile is frightful … and to our dismayed, unaccustomed minds the inclination apparently increases, as if the canyon walls were slowly toppling inwards ….[/quote]

The New Hance Trail is by far the most difficult trail that I have ever tackled.  But, the fear for my life had an unexpected benefit.  It is impossible to hang onto work  stress and to stay “plugged in” when every foot fall needs to be carefully managed to avoid plummeting to one’s death.  I definitely returned to work relaxed and refreshed.  Between the combined beautiful views and the requisite careful hiking, it is easy to see why it took 7 hours to go down the 5.5 miles to where we set up camp.

As you can see, the weather started to turn on us.  We still had a mile hike to get down to the Colorado River and the rain was starting to spit.  Just past camp, the trail itself joined up with what appeared to be a creak bed for when it really rains and the waters flow.  The creak bed made for a relatively smooth trek down to the river and back, despite the slowly increasing rain.  While the picture doesn’t show it, the rain reached its heaviest about the time we got to the river.  Though even then, we lucked out and it was still only slightly more than a trickle.

As we got back to camp, the small stream down in the ravine coming from a natural spring had picked up the pace making it much quicker to filter and fill our ~20 liters of water bottles.  Nathan started cooking dinner – a concoction of canned chicken, Ramen Noodles, garlic powder, and just a touch of red chili flakes.  The meal was delicious as Xheni and I plowed through over a quart of the soup.  This is once again confirmation that every meal tastes better in the backcountry.  As we finished up dinner it was nearing “Hikers Midnight”, roughly 8:00pm this time of year.  After a few pulls and passing the flask of some “Kickin’ Chicken” (Nathan’s found nickname for his favorite whiskey Wild Turkey), we finished up our conversations and set off for bed.

We awoke to a fantastic morning, which you can see here about an hour into our hike.  At this point, we had already traveled far enough that you can no longer see the walls of the canyon that were next to our camp site.  The morning also greeted us with a bit of stiffness, both from the strenuous hiking the day before and from sleeping on the ground which we are unaccustomed to.  After gobbling down some blueberry bagels for breakfast and drinking as much water as our bellies would hold, we packed up camp and set out.  It was a fantastic hike out and was very enjoyable, especially since going up was technically much less difficult then the hike down.  We must have been timid and fearful on the way down, since we were able to climb out almost 20% faster completing the hike in roughly 6 hours.  We enjoyed our post hike glow over a few beers, some hot-wings, brats and some more friendly banter.  It’s hard to imagine a better way of spending a few days.

If you found this interesting or useful, please help spread the word: